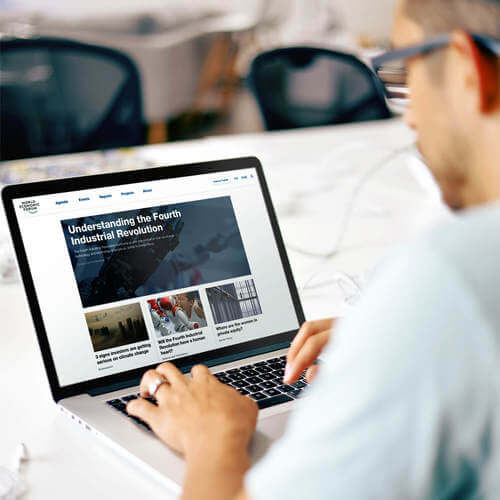 When global attention turned to the World Economic Forum during its annual meeting in Davos this January, readers logging on to www.weforum.org from around the world did so to an entirely refreshed website – one which had solved a range of technical, design and product challenges including rebuilding a web platform around customer relationship management, designing around an authoritative brand identity, and applying lean and agile methodologies to the organisation.

The Forum had come to Made by Many because, with over one million visitors to www.weforum.org every month, it needed an adaptive and modern digital platform fit for its diverse global audience. We delivered a high-performance, responsive website and a powerful bespoke content management system in the run up to the event.

It’s a testament to the project's success that engineers were able to make tight iterations to the platform and deploy them live during a period of peak traffic (with over 2,000 users on the site concurrently) for the four day-gathering in Davos.

“We gave Made by Many an almost impossible task with frequently shifting requirements and hugely demanding timelines, but they delivered,” says Mike Hanley, Head of Digital Communications at the World Economic Forum. “The new web platform they designed and built performed brilliantly during the peak traffic of Davos, and unlocked really significant workflow, productivity and user experience gains."

Here, the Made by Many project team describe some of the objectives, challenges, processes and results in a successful project which provided the Forum with a website tuned to meet its ambitious goals.

The Overview: Remaking the World Economic Forum’s web platform for the digital era

Peter Parkes, Made by Many Strategy Director: This project had a dual purpose: to move the Forum off some existing technology – two different content management systems – and simultaneously to continue fulfilling some existing content requirements around the Forum’s biggest event of the year. It was pragmatic in that it ticked a lot of requirement boxes on the client’s side, but with a design and speed overhaul that even the non-tech-literate people internally could appreciate.

Ilya Poropudas, Made by Many Technology Director: on one side the project was about replacing different systems, and on the other side, setting up a new platform that would allow the Forum to focus on harnessing digital to further their bold and ambitious goals around improving the world. Digital plays a massive part in the way they are tackling global issues, and the Forum builds bridges between lots of different organisations – NGOs, governments, corporations – in terms of communications, partnering and collaboration. This was about enhancing the potential reach of the website. The Forum is also a leader in publishing and syndicating content, and is an authority on economic, industrial and social issues. Therefore the website faces two ways: to the public, and to users of the CMS, the publishing system.

The Client: working with the digital media team to achieve the WEF’s broader goals

Ilya Poropudas: Our day-to-day client was the digital media team, whose remit is to run the website and the Agenda, a general interest publication focusing on topics of interest to a broad audience. The digital media team were responsible to the rest of the organisation, in ensuring that the website meets the needs of hundreds of communities and ongoing projects across the globe.

We brought focus, asking, “what is the most important thing to work on”, and focusing on it ruthlessly, while simultaneously being neutral, objective arbiters. Part of the task was about speaking the client's language. We don't just come in and build a website – instead we must understand what a client's needs are, and why they do things. We always tie what we're doing back to the organisation's purpose and ultimate goals.

Ilya Poropudas: The most challenging aspect was the breadth of the work to be done: different sections of the website and communities with their own needs. The website also had to interface deeply with Salesforce. While using Salesforce as an SSOT might make sense, it does pose problems – for example, it allows rich text formatting of content, but we want to store content agnostically such that it can be used in a variety of contexts.

A further challenge was understanding workflow: often there are vast amounts of data objects with their own workflows. For example, an event composed of multiple programmes with multiple sessions, such as a webcast.

Oli Matthews, Product Developer: one bugbear was around the web platform talking to Salesforce, which is CRM software. The Forum needs a high level of governance, accountability and auditing, and much of the content is highly sensitive. A single approval system allows them to add and remove things, and gives a place for content to be created and edited, which means that Salesforce makes sense as the Forum is a member organisation. Essentially what we built was a portal into the SSOT that anyone can tap into. Modern DevOps practices and security were also extremely important in the process.

Ilya Poropudas: the web service is divided into three applications: the architecture of our application is the CMS, a public website and the API. The Forum also has a private members’ area called Toplink, which also needs to ingest data managed within the CMS. We used Sir Trevor, our lightweight content integration tool, which has recently had some updates partially necessitated by our use of it for the Forum.

Oli Matthews: In the beginning the task was to replace the existing web app, but the set-up was fractured. The main tech brief was to bring everything into the platform, and allow things to spin off it: connect with Salesforce, and automate the procedure. The project was also about building a public API to enable other apps to consume the Forum's public data. Moving forward they will be able to extend the web app easily.

The Process: bringing dynamism and agility

Veronika Janeckova, Made by Many Product Manager: the Forum is a highly structured and traditional organisation, and the key process challenge was bringing dynamism and agility to the project. We began with stakeholder interviews to understand workflow, and met the digital teams to understand what stakeholders did and didn't like, and where the gaps were. We worked collaboratively to define priorities.

A turning point in the process was when we took the client through prioritisation exercises to ensure that the project was constantly on track, using a points system: we split work into themes, and then broke each into features with a number of points according to value. We estimated how much we could complete by the deadline, encouraging the client to make choices – between something that was technically essential, or a nice-to-have feature, for example.

This was about drawing a line between waterfall and agile processes. The clients were active on Jira with stories within sprints, we used written stand-ups and a dedicated Slack channel. We designed in high-fidelity from the start using Keynote and Invision, and one big challenge was to get the designs we created from the design stage to sign-off, which is different from an iterative process.

The Design: adapting the brand for digital

Sam Small, Made by Many designer: the Forum’s brand is firmly rooted in the Swiss aesthetic: it is conservative and authoritative. Historically, execution of the brand in print design has been managed well, but online treatments weren't quite as consistent. We created a new design system for digital that respects the brand’s foundations and has a strong focus on content.

Some early design iterations tried to push the brand out of its comfort zone. Ultimately these experiments felt trendy, ill-conceived and were at a disconnect from how stakeholders perceived the brand. This brought us back to the principles of the brand and Swiss design, and the result is a primarily functional, modern, clean design that supports the content.

Previously the website organised content by type — separate rows for videos, articles, reports, and so on. In the context of news and factual, we reorganised content by topic instead, providing tools for the Forum to create packages of content relating to a specific topic. This gave the opportunity to promote pressing issues, thereby unlocking a wealth of content that was previously hard to find.

Additionally, we restructured the Agenda landing page to showcase the Forum’s Global Challenges, giving an overview of the wide range of issues that matter to the institution.

Finally, we thought about the onward user journey. A large proportion of traffic to the Forum’s blog is to single articles via social media, and we created a design for the article page that allowed for deeper exploration into the same topic, as well as links to recent articles.

The Results: a supercharged, evolvable platform for the future

Peter Parkes: In many respects this project is a great example of the potency of the Made by Many approach.

The highlights and challenges included working with a client team unfamiliar with lean or agile processes, and one who was beholden to a large and traditional organisation, and thus unable to do the things they wanted as a result, and a Made by Many team that was able to deliver an extraordinary pace of change during a massive global event – deploying changes twice a day to a site receiving hundreds of thousand of visitors.

We built an incredibly stable and robust platform able to withstand record levels of traffic during the biggest event of the year, and also to deploy new functionality at peak traffic. Working with the security team at the Forum we also created a very secure, stable and modern infrastructure without sacrificing flexibility. The technical output was impressive, traffic to the website is higher, the site is faster, and the CMS operates more quickly.

Ilya Poropudas: We often encounter difficulty in getting a company to go digital. How far does that cultural change reach? We certainly made an impact on the immediate team – our product owner at the Forum went on an agile course to better understand product development. But we could twist it the other way round: the work we did is a testament to Made by Many's flexibility, because we had to adapt as well. 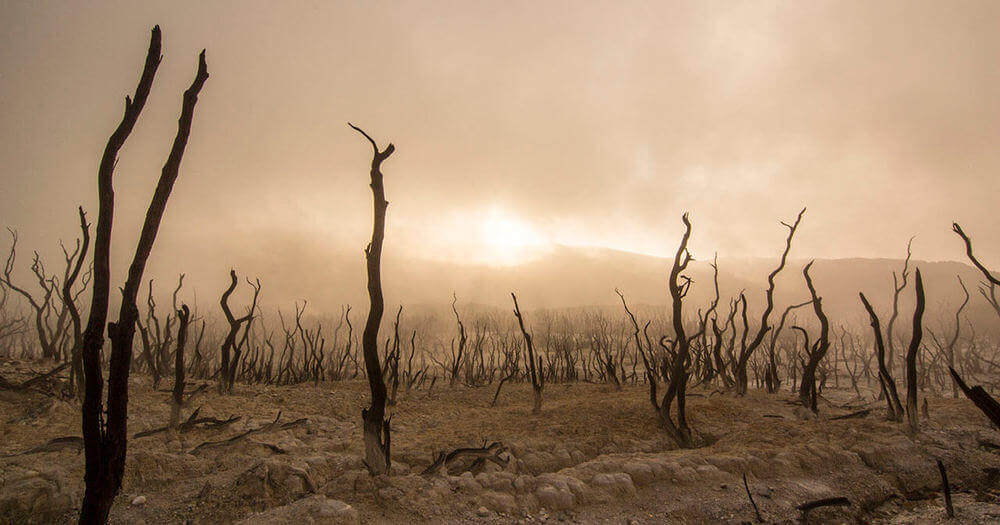 How to survive as a lone QA engineer

Being a QA professional can be quite difficult and stressful, particularly when you’re stretched across multiple projects. Some experts say it’s not possi...

Can we revolutionise Telehealth?

At Made by Many we passionately believe that design and technology can make a huge difference to people’s lives – especially in the sphere of health and w...

The right way to be wrong

What growing up under communism taught me about the value of prototyping.