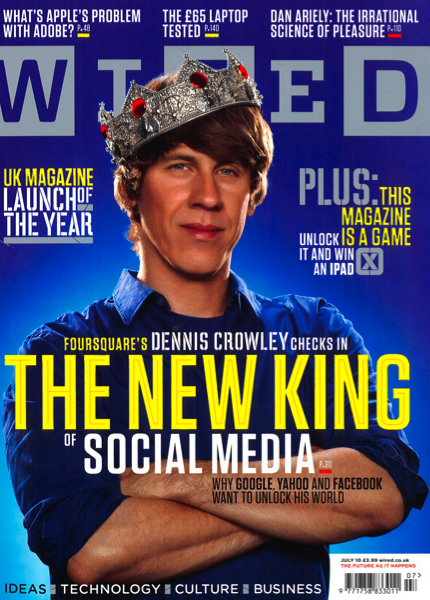 Those of you who know me probably know by now that I’ve gone off Foursquare. It seems like a mystery to some, because I was once what some people, at least, would call a ‘super-user’; indeed, though I wasn’t officially nominated as one on the Foursquare Get Satisfaction page, I regularly (at least a couple of times a week) found myself notifying Foursquare of duplicate entries, address errors and so on.  I checked in everywhere I went, and by that I mean even in bars I found myself in at 2am in the morning on a Saturday, or a tube stop that I found myself at in between my daily commute, as long as it had network reception. I didn’t have an excuse for not going anywhere I was invited to by a Foursquare friend, because they’d know where I was.

But then last month, I got fed up and stopped using it. I’ve been asked by a few people to write about why I suddenly exited Foursquare, so here goes.

First, it got to a point where there was no challenge and no motivation for me to check-in. After a couple of weeks getting used to it, I was in the top users amongst my friends, and often right at the very top.  So, though I went on checking in and continued to rack up the points, I felt like I was running in a dark tunnel which had no end. In a great post on the BBH Labs blog, Saneel Radia uses Foursquare as an example of a service that isn’t learning from its ‘leading clever people’ who by default, often have very low boredom thresholds, and I couldn’t have put it better myself when he says:

Foursquare is still in early development, but it currently depends on the system to alleviate boredom. The monotony is broken via badges created by Foursquare or its partners, and awarded for activities any user can do (i.e., “check-in”). In other words, it’s not self-fulfilling. It places an exceptional burden on Foursquare itself, rather than on the community, to validate the catalytic creative contributor. Put another way, Foursquare may have created a barrier to its own success.

Second, I saw a couple of first-hand examples of the reward mechanism being broken. @stueccles, for example, became the Mayor of a certain venue one day, but when he went to the counter at the restaurant to redeem his Mayoral discount, the staff just blinked in complete incomprehension as to what Foursquare was. So you have a system where the way it works has no meaning to vendors who are signed up. One way to counteract this is to make it mandatory for all venues who are signed up sign some sort of declaration that they understand what Foursquare is and that they’ll pass this knowledge on to their staff, but when you come to think about it, why would they bother? What does Foursquare offer vendors themselves? They can’t really guarantee a certain number of customers via the service, can they? Of course, the truly forward-thinking businesses on Foursquare realise its value without having to be told, but I think the percentage of those who do is insignificant at the moment.

Third, and I think this is crucial, it fails to see its own social benefits. For example, Foursquare limits you to friends in your own city when it pins you down as being in a particular city, even if you have plenty in others. Conversely, when you travel you see only friends in other cities and not those in your hometown. I don’t think that being resident in a different city means Foursquare should more or less grey friends out of your life, because the social factor – knowing where they are, what they’re doing – is part of what should logically add to its allure. When you go to New York and catch up with friend X who lives there a few months down the lane for example, you could potentially strike up a conversation based on the fact that they frequent a particular restaurant or bar that you used to go to when you lived there (or something). That seed of conversation is what Foursquare is completely neglecting as it stands; its own social capital. At the end of the day, the way it is currently structured, it is a service that is of any benefit only in areas that see a high level of technology adoption and where all your friends are on it.

It looks like Foursquare are aware of the problem they have on hand though, because yesterday it was reported that they are looking for a data scientist, and in September Dennis Crowley admitted they were building a recommendation engine of sorts. Read Write Web are of the opinion that “Getting into big data in a big way would be one way for Foursquare to build value and keep from becoming just another check-in service.”

However a more realistic point of view was articulated in a comment to the Read Write Web post:

Sure, "recommender systems" add value, but you've got to have a solid baseline / business model before you go building one. Amazon was a great online retail business *before* it built its recommendation engine. Netflix was a great movie rental business *before* it built its recommendation engine. Recommender systems are a massive software and even hardware engineering challenge.
Google is a great local search / advertising / mobile business *now*. They have cubic miles of servers, a solid mobile platform, the best mapping system, solid partnerships with all the major mobile carriers, and hundreds, perhaps thousands of data scientists. If there is economic value in recommender systems, it would be easy for Google to build one.

It might be a bit harder for Facebook to build one, but they've got a much bigger social graph to work with than Foursquare. I think Foursquare needs to take a good hard look at the competitive environment they're in before they try to take on something like this.

So – yes, Foursquare: you really need to take a good hard look at what your business model is and who your competitors are. It may be indicative of a more endemic organisational growth challenge: Facebook did after a point go from Harvard-only to Ivy League-only to worldwide. You don’t have much time to waste though: Facebook Places is already in the game. I think your next move, done right, could be the answer to the industry question ‘where next for location-based services’ – and I’ll be more than happy to log-in to my Foursquare app again when that happens. And most likely, so will the slowly growing number of people I know who think Foursquare is trending down as well.

Anjali couldn't shake off the habit of calling herself a 'citizen of the world' for the last decade, having lived in 5 countries so far, but has now amended that to 'citizen of the internetz'. She is a strong believer in technology as an agent of social change and likes exploring the relationship between digital services and physical objects. Robots and transmedia storytelling projects intrigue her.