So, back from another SXSW :(

It's great to be back in a country where the butter doesn't contain sugar by default, where fizzy drinks don't come in buckets and where you can buy meat in units of less than one pound. But... I will miss adding cheese and chipotle oak-smoked maple-flakes and sugar-coated tequila-bacon dust to my deep-fried food. If we hadn't got out when we did I would not have fitted through the doorway of the plane.

It was another awesome trip for Made by Many for many reasons - not least because of the way people embraced Picle, the iPhone app we launched.

We promised to make Picle an open experiment in Lean product innovation. To that end, we approached SXSW as a giant customer development exercise. This blog post is about how we prioritised the feature-set that we launched with, and how we might grow and evolve from that Minimum Viable Product. 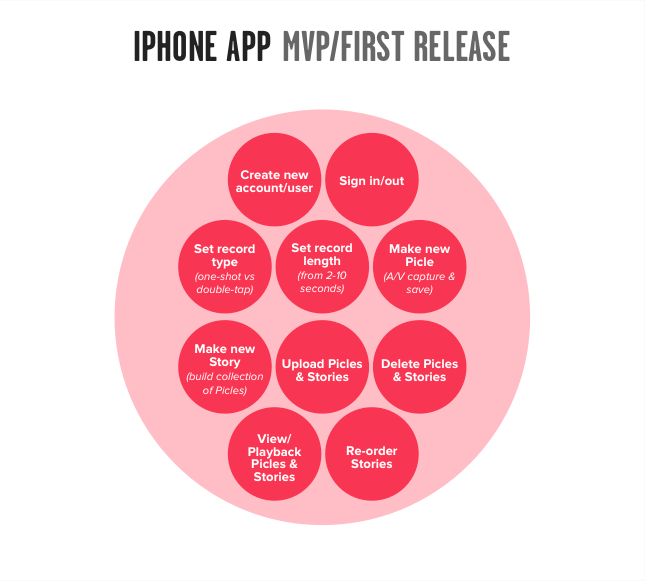 In particular, I wanted to start by explaining why the features above were prioritised ahead of some of the seemingly-obvious must-haves like social sharing.

Let's be super-clear, the Picle app and companion web service/website we launched last week were about as minimal as you could possibly get - but that's the point.

The feature-set above was the absolute least that we could launch something with in order to get useful, actionable feedback about where to go next.

Prioritising things is very difficult. Our evolutionary journey has ingrained many instincts that conflict with this Lean approach. We humans all want more than we can eat - it's not just Texas!

We've tried very hard over the past decade* to overcome these unhelpful instincts when making new stuff. What we've found useful we've stolen and syncretised - our approach is an ongoing experiment but you could describe it as the bastard love-child of Agile, Lean, Visual Thinking and Service Design. We're like magpies - nicking tools and ideas and rolling them into an emergent set of practices.

At SXSW we went to an event at Adpative Path's offices where Made by Many's @saulpims talked about this. The high-priest of Lean, Eric Ries, introduced the evening with a suitably inspiring statement that resonated with the way we've approached Picle: 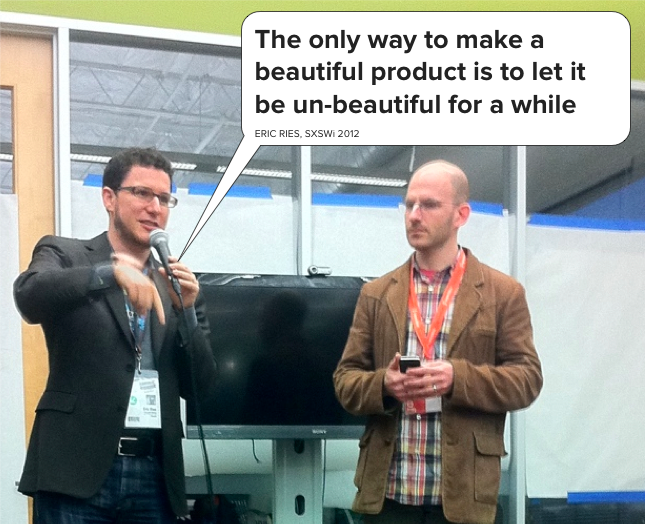 This is a philosophy we've been talking since about 2006. This little excerpt from the still-very-excellent Getting Real book by 37 Signals is packed with gems that neatly encapsulate the approach, for instance: 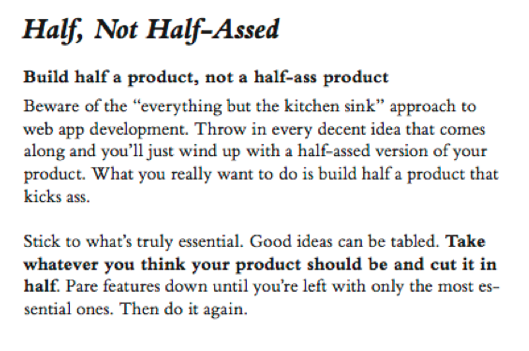 Skip forward to 2012, and we're using that approach in conjunction with a live feedback loop from real people - in this case, the thousands of comments, ratings and reviews, tweets and conversations we've had with real people about Picle over the last week.

We deliberately launched Picle without features like social sharing. We deliberately built less, because the leaner you are the easier it is to change.

Less mass lets you change direction quickly. You can react and evolve. You can focus on the good ideas and drop the bad ones. You can listen and respond to your customers. You can integrate new technologies now instead of later. Instead of an aircraft carrier, you steer a cigarette boat. Revel in that fact.

So, here we are - lining up the next releases and weighing up what to add and how the vision has evolved. Instead of  trying to guess, or simply indulging our guts, we've got loads of evidence. We want to do this in the open, and so we're going to share.

Starting with the iPhone app first then (remembering that we also launched a web service and Picle website, for which there is a separate MVP and Icebox) - the diagram below shows the launch release/MVP feature-set, and a bunch of features that we're thinking of buidling in subsequent releases. The future features are labelled 'Icebox' for obvious reasons. But please also bear in mind that we are also applying fixes and optimising functionality that's already live - both of which have been ongoing since before SXSW and will likely make a new release in a couple of weeks . The darker circles are also already in the next release. 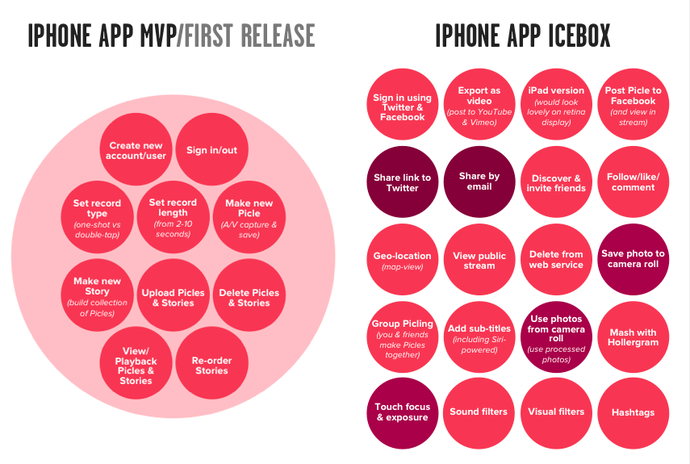 It is a law of nature that you will always have more ideas than you have time to make, but the point is that the things on the left - in the MVP - were prioritised because the things on the right probably wouldn't make sense without first having them in place (for example, there's no point in building sharing in before you have something to share).

Of course, it's going to get more tricky, as we're going to have make decisions about which direction to take Picle in first. In this, we shall be led by customer feedback and validation above all.

To quote The Eric again: 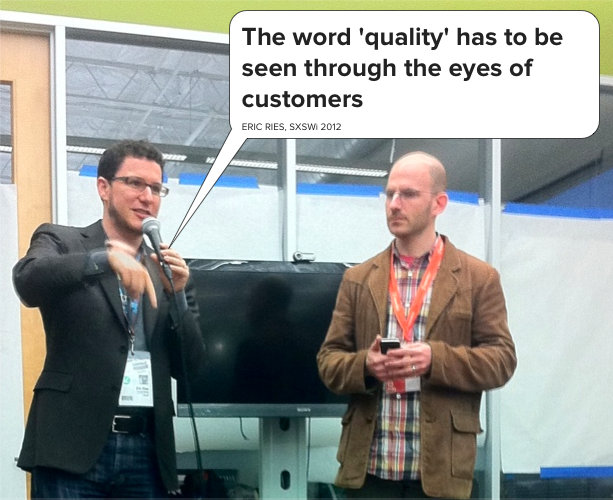 So, on to the web service and Picle website.

Have you seen it? You have to register through the iPhone app and then you can log in. At the moment it's still very basic - we rushed to get it out the door in time for SXSW - but it's already starting to look pretty good. 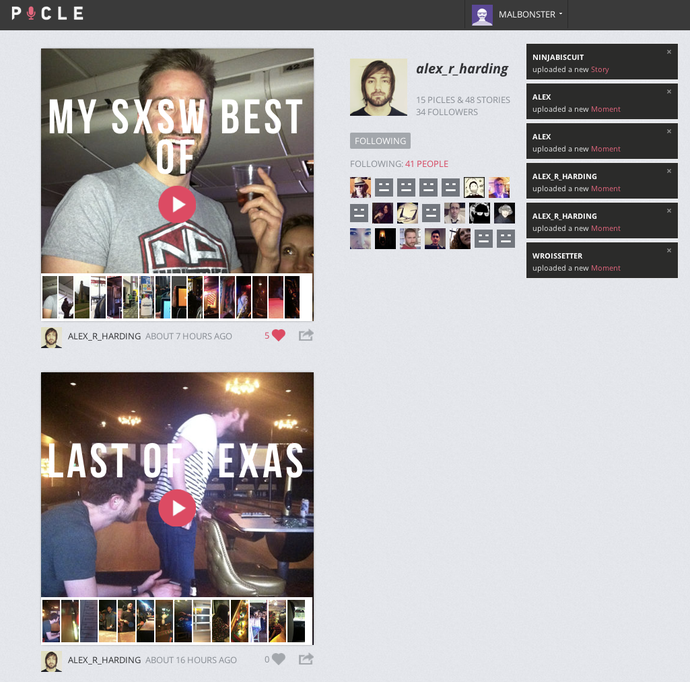 The first thing to say is that we're making daily releases of new stuff to the web service - there's no app store submission process. But we still have an icebox or backlog of candidate features we might like to add. Obviously, some of these would synchronise with new directions in the evolution of the iPhone app.

The diagram below shows the core functionality we bundled into the initial release, and the features we've got on ice as backlog. The same point as above re: fixes and optimisation obviously applies (think error messages for example). And again, the darker circle has already been done but not yet deployed. 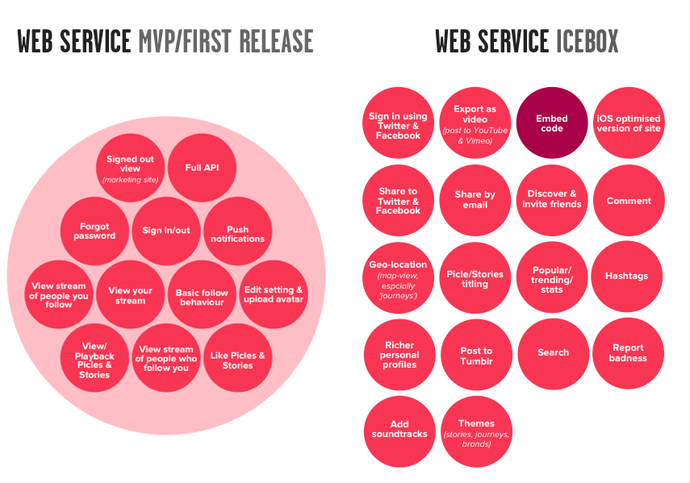 And finally, the *really* difficult bit

Let's be really honest - we're a small product innovation and service design company with clients. Our model is to help clients make their own product and services and we're not set up to launch and operate our own. We made Picle in our spare time and launched it for a bit of a laugh at SXSW, and because it felt like it was worth taking a punt. The question of whether agencies can make products, or should act more like start-ups, is a hot one precisely because no-one really knows how this might work: we are in uncharted territory and Picle is a leap in the dark.

Perhaps the most difficult challenge we face in the coming weeks and months is to maintain the momentum and commit the required attention and resource to make Picle as big a success as we believe that it can be. This will be tough.

But this is why we put something out there in time for SXSW.  Alex had a great idea that we wanted to validate, and the feedback is positive: there is something good about being able to create and share little story objects from moments that are captured on a mobile phone with a photo and soundclip.

Picle allows you to make things that are more like dreams than documentaries. For me, the app's power is to challenge the idea that video is always the answer.  I think @conordelahunty may well hurt me for saying this but Picle seems to leave a lot more space (dare I say hackable space?) for your imagination. It's closer to a comic strip than a film, and it's part of an ecosystem of storytelling and processing apps that - for example - power Instagram.

We have been overwhelmed by the quality and usefulness of feedback we're getting from every direction. Please don't be shy in coming forward with your thoughts.

* Made by Many is a collection of teams and individuals who have worked with each other at different times and in different places over the past 10-12 years. We came together in 2007 to do this under one roof as a product innovation and service design company that applies start-up thinking to create transformative business outcomes for clients.