Reading with interest an unfolding flameup at Design for Service caused by Jeff Howard’s post entitled UX Rockstars need not apply. The gist of the conversation is a few folk getting all hot under the collar about disciplines and domains. Especially the emerging challenges in the US by this new fangled idea of ‘Service Design‘ and it seems to be freaking people out. Which is a good thing in my book. The argument was instigated by sweeping statement from an interview with Jesse James Garret of Adaptive Path, that went like this..

JJG: I think any distinction that you could draw between service design and user experience is purely academic. In practical terms, the overlap in the problems being solved, the methods applied to solving them, and the philosophy of practice is so huge that anything you could say was purely a service design issue or purely a user experience design issue would be an extreme edge-case. They may persist as separate areas of intellectual inquiry, but as fields of practice I think they’ll inevitably converge. So in that sense, SD vs. UX is the new IA vs. IxD.

I’ve worked in SD for a while now and some things have always interested me:

Service design is going mainstream, hence SDN funding a Guardian supplement (which is nice in pdf form too). To me this nascent gold rush is really exciting since the service design domain has felt bottled up in a slightly rarified world of semi-academia for a while. As a result we have a very cool set of methodologies, tools and values that for me blow away a lot of more established thinking (people & insights not humans & factors). However as a practice it will be exposed to a more aggressive commercial space long inhabited by seasoned heavy weight Product Design. This process is going to shake it up and as with all niches that bob up into the mainstream SD will be carved up and re-purposed according to the usual forces ($£).

SD will, I hope, retain many key subsets like sustainability, social good, social innovation, but the result of the land grab will mean it’s no longer a niche exercise for small organisations selling it as a boutique erm.. service. With dilution comes inevitable blurring of boundaries and misunderstanding. At SXSWi, I met a guy who claimed all his agency did was service design and then claimed that you can’t do it out of marketing budgets. Isn’t that a weird way of deciding what’s in and what’s out?

Is it a panacea? Probably not. But it’s definitely a key part of the new-new economy – the one at Made by Many we seem to spending a lot of time working with. SD delivers a way of thinking that can handle clients whose business models imploded and no longer fit with how people want to use/consume things. SD gives us processes and thinking that’s flexible enough to give designers opportunities for innovation that haven’t existed before and go way beyond the UX. 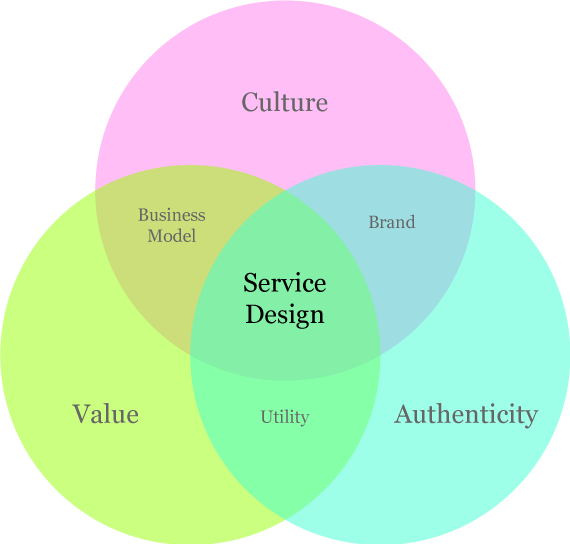 This model works both upstream to client's businesses and downstream into the organisations working with them.

Claiming User Experience is identical and eventually will merge with SD feels like a mistake since it devalues a principle that could provide immense opportunity. This is the nub. I don’t believe saying ‘SD vs. UX is the new IA vs. IxD’ makes sense. What’s the point in taking such a divisive view? The key thing is surely that it’s not discipline specific, it enables many different practices to work together within a platform that is service design. It’s precisely SD’s lack of an exact definition that enables a space for UX, Business Analysts, Anthropologists, Interaction Designers, Technologists, Inventors, Entrepreneurs to collaborate so easily. Surely this way everyone can be a ‘Rock Star‘.

The next frontier is to experiment with mixing these principles with Agile processes. For me this feels like the way to a fully weaponised Service Design (but that’s another post).

c) components vs. systems or forests from trees. service designers are the opposite of user-centered designers b/c UCDs for the most part come from the world of either artifact design or engineering. Both of these worlds design trees which at best are put together to build forests. Service Designers imagine the forest first, and then through deconstruction and abduction grow (not build) the right trees, and more importantly lay the foundational labor that affords the possibility if not probability that the desired trees WILL grow in this new environment.

Thanks to Justin Baum for pointing this story out.