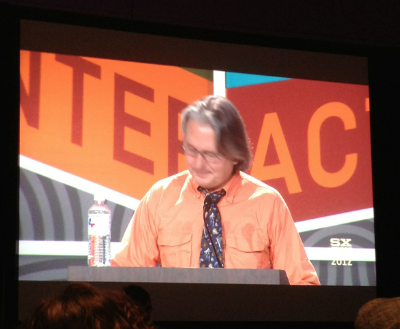 Bruce Sterling's closing keynote at SXSW was typically fiery and inspirational. But whereas last year's felt like a war cry, this year there was a strain of hope in his words.

And he summed it up this way:

Be passionate about what you do, because now is a pretty awesome time. Simply put, this articulates something I've been feeling for a while and the best things I saw at SXSW made me feel more like that.   Here are the reasons why I'm excited to be doing what I do right now.

It's getting to the point where the internet is pervasive

The internet is already well on its way to moving out of computers and into devices - there are almost 1.2 billion active mobile web users in the world and working internet on mobile has only been around for a few years. Making the web mobile is giving access to people in all kinds of situations - by 2015 it's predicted that more people will have access to a mobile than to electricity at home.

And that's just the begining, soon it will be in all kinds of material and unexpected places. The touchpoints are expanding and becoming less noticeable as a result. It’s just always there, like light. I think we are able to make things in more interesting, useful ways the less we have to worry about explaining how it works and what you can do with it.

In this fantastic article about the internet written by Douglas Adams in 1999 (if you haven’t read it before, you should), he talks about how new technology becomes part of the fabric of our world:

1) everything that’s already in the world when you’re born is just normal;

2) anything that gets invented between then and before you turn thirty is incredibly exciting and creative and with any luck you can make a career out of it;

3) anything that gets invented after you’re thirty is against the natural order of things and the beginning of the end of civilisation as we know it until it’s been around for about ten years when it gradually turns out to be alright really.

The majority of people working today were under 30 or not born yet when the world wide web was invented.

I think it’s more exciting to be working in the internet now than it was in the 90’s. Yeah that time was cool, and everything was a new horizon and it was all untrammeled and unregulated. I understand the nostalgia for that and I’m a bit jealous I was too young to be part of it. But now that we’ve stopped pointing and cooing at this stuff, we can get on with using and exploring it. It's not about being on the fringes anymore but at the same time, it's not been around so long that all the brilliant things it can do have been discovered and mined.

Normality is around the corner

Another problem with the net is that it’s still ‘technology’, and ‘technology’, as the computer scientist Bran Ferren memorably defined it, is ‘stuff that doesn’t work yet.

That was back in 1999, and although we’re still talking about the internet as technology today and the part of SXSW that focuses on it is still called interactive, it feels less and less appropriate. We keep having to reinvent ways to describe things as the technology changes and morphs into simpler, less alien formats. For example, noone says they’re dialing up to get online anymore. We don't really talk about 'the net' either.

Working in this world, it’s easy to forget that we’re still learning. My mum thinks that everytime she gets a Skype notification that a contact has come online it means they want to speak to her right now. I think we screwed up when described it to her as an online phone.

We can start making it more human

In a great panel I went to about designing tomorrow’s interfaces todays, Fabian Hemmert described success as:

Fabian’s been doing some bonkers work prototyping different types of phone interface. From the nervous titters, I’d say the whole audience was pretty creeped out by the kissing phone - a phone with a sponge that get moist on your cheek if you’re partner kissed the phone at the other end.

But the phone that breathes and has a heartbeat was fascinating. Apparently, after a while using it, people stopped being aware of it but then they’d feel lost without it at night. Like they were missing a limb.

Making technology more human and emotional doesn’t all have to be about hitting the uncanny valley, like BINA48, the first robot panelist at SXSW clearly did.

Bruce touched on this too in a piece of design fiction projecting a future teenager looking at footage from SXSW: “what is that weird slab of glass she has attached to her face?”

Yeah there’s a lot of crap and evil shit out there. SXSW was saturated in brand and marketing landfill. If you wandered into too many of the wrong kind of panel, you might think that noone is interested in making things that are useful, playful or awesome (in the original sense of the word).

Bruce didn’t let us off too easy. He spoke about the stacks (a word he’s coined for the Googles, Amazons and Facebooks of our world) and the negative impact they’re having on us as a culture and society.

You're not really a customer of the stack, you're its livestock, ignorant of what's going on moving from one pasture to another #SXsterling

It’s not all glittery and amazing. Just look at the words of the disappointed, disillusioned people who don't want to work for the stacks and other arrogant, over-reaching companies anymore.

But, I can’t think of anything I’d rather be doing than working in the internet right now. New ways of doing, interacting and understanding the world. It feels like being an engineer at the beginning of the industrial revolution or an artist in the early 60’s.

It’s a point where the future is open and we have the chance to shape it. Let’s not waste it.

From ancient Greek heroes to digital communities, Cath is fascinated by people and what makes them tick. At Made by Many, she works on strategy, project management and service planning. She is particularly interested in the intersection between sustainability, technology and human behaviour.