We were five years old at the weekend, which seems like a good moment to pause and look back at what we've learnt.

Let's start by going back in time.

It's 2007 and in only a few weeks the global financial crisis will begin to become apparent. Four naive idiots are un-boxing new Apple equipment behind a wall of glass inside BBH London's incredible marble atrium.

They are joking nervously about keeping the boxes so that they can sell the machines when the company folds. How they laugh...

They have a bunch of half-baked ideas about wanting to create an entirely new type of digital agency - one that makes products and services (we used to say "apps and platforms") instead of marketing campaigns, and tries to learn as much as possible from the way successful start-ups do it.

They are interested in the fact that agencies aren't making the most exciting new digital stuff, but start-ups are. This is still true, and by 'most exciting' I mean 'used everyday by millions' and 'building real value over time'. I don't mean 'award-winning campaign' or 'spike-of-paid-for-eyeballs' in the digital landfill tradition. I do not count 'engaging audiences for an average of 1.4 minutes in an unforgettable participatory experience delivered through social badging and shared on Facebook', even if there is a really lovely 'making of' video.

They have some crazy hypotheses they want to try out:

These chumps think their ideas gives them an edge: the edge to be able to make things people actually want, things people will use because they're actually useful, and to make them more rapidly and to a higher quality than other people can.

Hahahaha! And they believe in the disruptive power of the Internet and love the way that big Internet foot is poised to stamp down hard on a world of #FAIL. 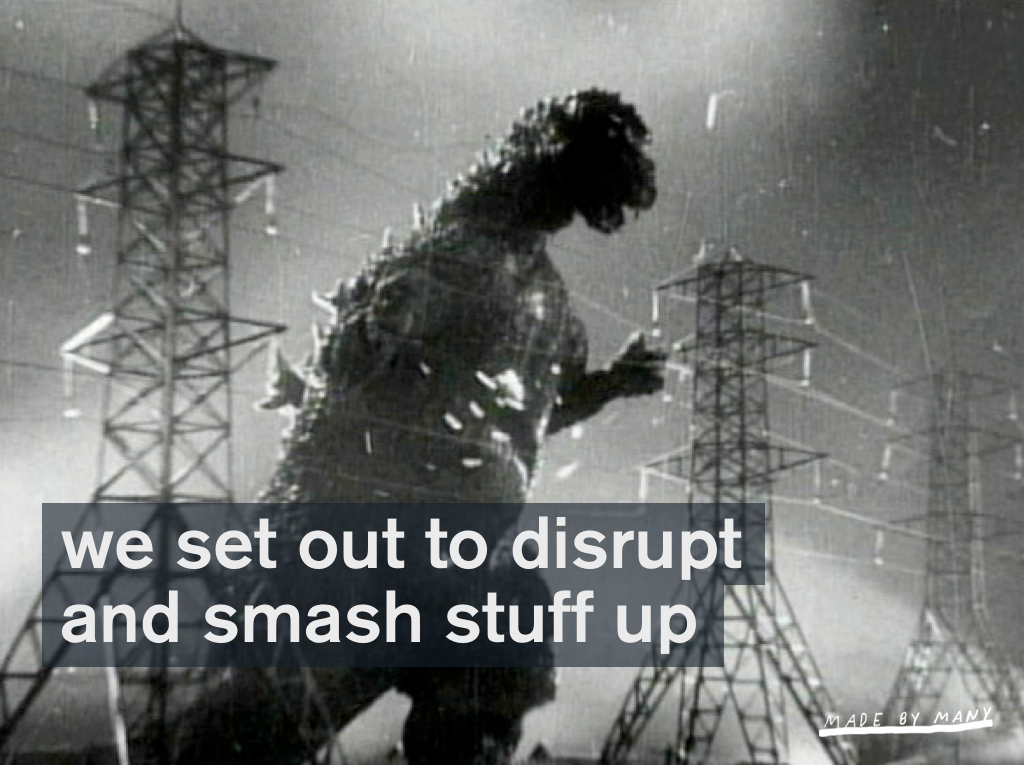 This slide used to appear very close to the front of our creds deck - and we used it to test potential clients. If they flinched at this slide we wouldn't work with them

Flash forward to the present. We are still in business - which is good! There are still 4 founders - which is remarkable! And now there's a company of 33 people sitting in a beautiful studio overlooking the Regent's Canal in Islington. 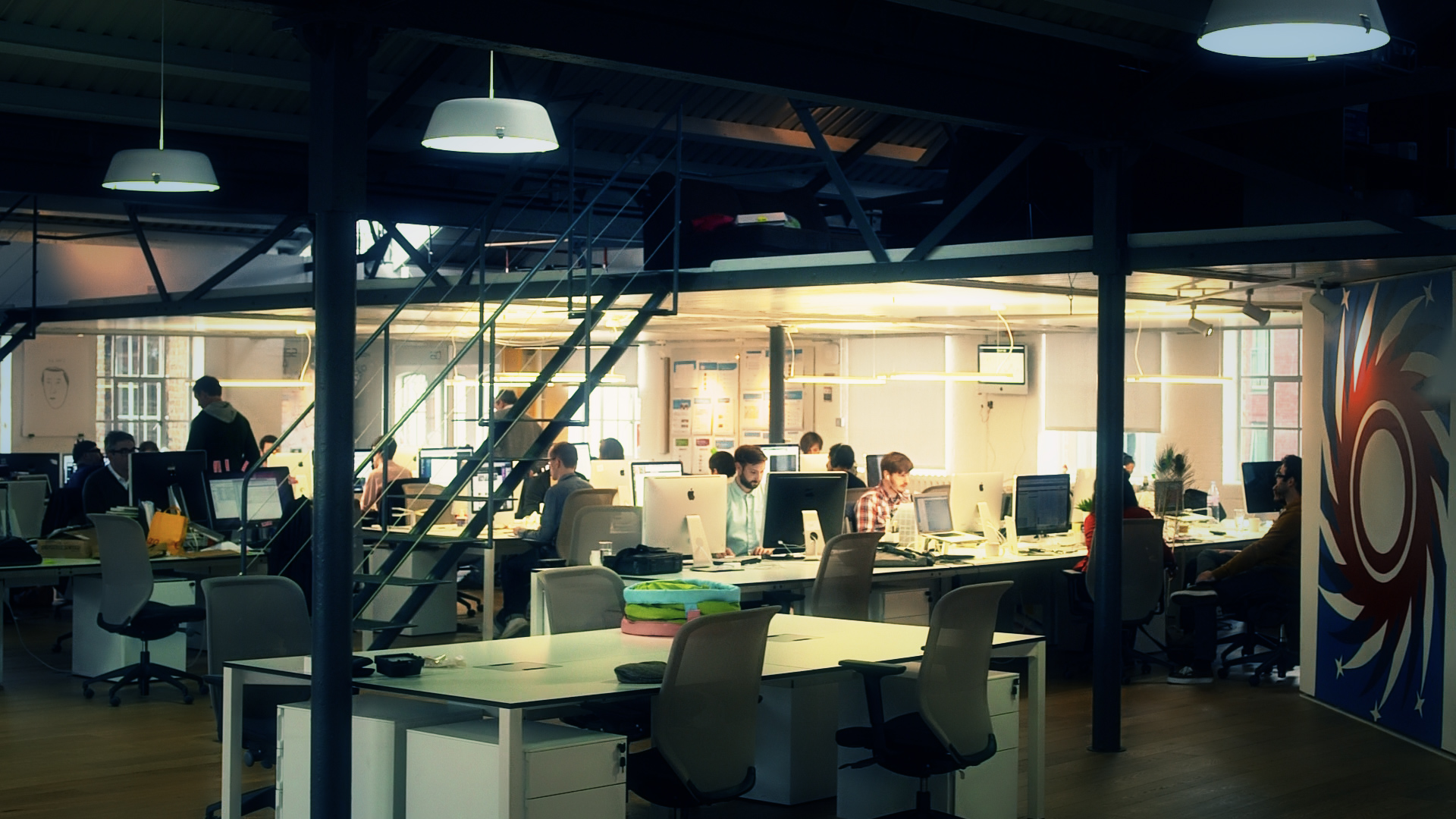 So, what have we learnt?

People are amazingly generous - We've had so much help and advice from people over the past five years - from the friends who told us we'd be mad not to go for it and encouraged us to quit our last jobs, to the amazing clients we've been lucky enough to work for along the way, and many awesome people from other agencies. We've taken inspiration from their generosity and learnt a huge amount from everyone. Special thanks must go to BBH London - from whom we learnt a great deal, and who made us seem far more established than we were five years ago by providing the roof over our heads and the cappuccini in our bellies for three years. There are so many people to thank, probably too many for here - you know who you are. We are truly "Made by Many" awesome people over the past five years, and thank you for that!

Many of our starting hypotheses were wrong - Unsurprisingly, we got loads wrong. What a white-knuckle ride of rapid learning it has been, and we're still gripping on very tight.

Turns out it was very difficult to make Agile work end-to-end, until we got into Lean. It was Lean that really helped us learn quickly as opposed to merely working quickly. Lean gave us the tools to remove ego from teamwork and replace it with evidence.

Within the first 12 months we'd learnt that we *did* need our own developers, and that involved us in making some choices about technology that were hardly agnostic. We do lots of Ruby on Rails now and that's great - and being able to develop stuff ourselves has become a vital part of our Make, Test & Learn approach. You can't make stuff at the same speed you can dream it up and test it if your devs are sitting somewhere else. When we tried that, even though we worked with some really great devs - we lost those final few percentage control points. They're the really important ones.

We were right to focus on products and services, but a little early - When we went about telling people we wanted to make platforms and applications in 2007 no-one really understood what the hell we were talking about. People would look a bit embarrassed when you mentioned service design and agile. But now - largely thanks to Apple I think - everyone understands the transformative power of packaging game-changing technology and design elegance. People understand the pull of utility now and they get the way the quality of service and total customer experience are powerful, vital forms of the new persuasion. 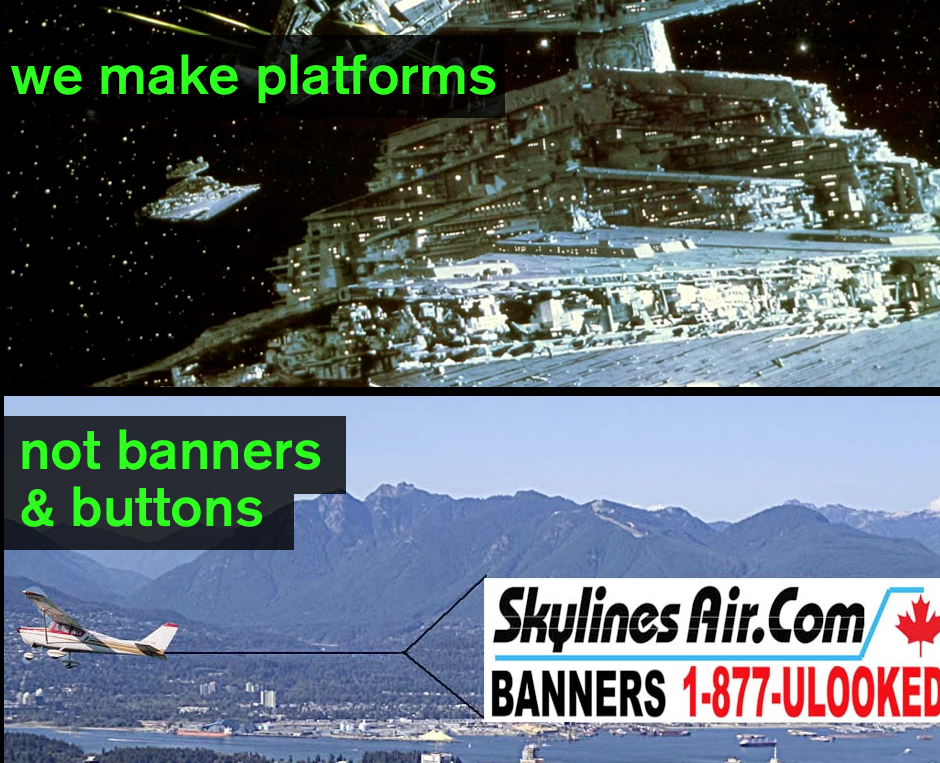 Some of our early creds decks had a Star Wars theme

The awesome power of a wide range of prototyping - From simple diagrams and models, to physical prototyping, to different types of software prototypes including split testing - prototyping means we can finally make stuff at the same speed we can dream it up and validate it. One of the best things anyone ever wrote about us was by Martin Belam talking about our recent ITV News work:

I was struck that the team on the project had not just prototyped tools, but prototyped workflow as well.
...prototyping workflow with live content ... brought them a key understanding. Trying to cover an event like national protests against public sector cuts revealed a strength of ITV’s newsgathering that had perhaps previously escaped attention.

I don't think there is a better way, or perhaps any other way, to understand not merely what the opportunities are, but which ones are worth trying out.

Projects, not retainers - err, mostly - People couldn't believe it when we told them we were only interested in projects and wanted to avoid retained relationships. It was because past experience had shown that retainers often incentivise everyone to behave badly. But never say never: as new products and services evolve from being little innovation projects to ongoing operational concerns we discovered that we do need a new kind of retained fee. Likewise when you start doing multiple projects for one client - if it goes the way it should go they usually want to buy a team, which is kind of like a retainer by any other name. Whatevs, we're still project-driven but we're less Taliban about retainers than we once were.

Treat requirements more like hypotheses - We struggled with this as we started to embrace leaner ways of working. It sure is hard to see your ideas as hypotheses to be tested, instead of the utterly genius solutions that you're so certain they are. But, unless you can learn to be less sure of your own individual ability to come up with the right answer then you'll struggle to make things that other people actually want.This is antithetical to the way much of the classical advertising world works, but  the challenges involved in what we're making are quite different: eliciting and understanding unknown needs and services that feel like products, and products that consume services. The way these persistent value systems work is way too complex to come unvalidated from a single brain-stem in the time-honoured manner of a great story. No. By far the most difficult thing we've had to learn, is how to validate ideas through the eyes - and data - of customers.

Do less: design less, make less - Related to the point above, it is also counter-intuitive to everyone involved on all sides to make the smallest thing you can in order to learn what to make next. That's just not the way the world used to work most of the time. It's not what people who make ads or digital marketing are incentivised to behave - they're often looking for the big bang and giant idea. Not many great services are launched like that.

Empower teams to make as many decisions as possible - We always talked about trying to be flat in terms of structure. Of course, that's pretty easy when there's only four of you and you all own a piece of the business. Nevertheless, our revulsion at traditional hierarchy has led us to a fairly good place where decisions are made by teams rather than the most highly paid person in the room (aka HiPPO). Instead we have tried to create a culture of customer and data-driven decision-making. I think it's one of the best things we've managed to achieve together.

Never, ever pitch creative work - We don't pitch often, but when we do the question of pitching creative work usually crops up. We never do it, even when - as happened when we pitched for ITV - other people we're pitching against do, and we want it, and there is pressure to conform. But it would be utterly wrong to talk about how important it is to discover and validate the customer need and problem space if the very first thing we produce for a client presents completely the opposite approach. Doing creative work at the pitch stage is a dangerous fiction and I am proud to say we haven't done it once.

Taking the risk is sometimes less risky than not taking it - We started with nothing and I remember that making me feel very liberated. Liberated from having a salary. Liberated from needing so much money. Paradoxically, I actually felt better off when we started than I had felt for years. If you are interested in your job, as opposed to just going to work to earn money and punch the time-card, the thing that often tips you over the edge when it comes to leaving a safe, comfy job is the feeling that you're not learning anything. I'd prefer to take the risk of failing than have that feeling. Having said that, it's a fairly calculated risk: the worst that can happen is that it doesn't work out and you have to go and get another job - but I've always thought that at least I'd have something interesting to talk about during the interview. On the other hand, not even taking the chance would have been very sad.

The hardest lesson we've learnt so far is how to learn - We are still learning, but I think the difference now is that we see rapid learning as being a core part of the offer. I am convinced that we can get better and better at helping other people to learn what to make and how to make it. This will help us make our own products and services, which we're hoping will become a much more important part of the business over the next five years. There are some very exciting Picle developments coming soon, and our recent internship programme has brought two brilliant young makers (a product designer and a developer) into Made by Many to make connected physical products. Product is a real focus looking ahead.

So there we are. A bit rambly and probably not an exhaustive list of 'stuff we learnt' - but hey, the post is in beta and I'm certain my colleagues will chip in with many other lessons to be drawn from five years of being awkward bastards.

Here's to the next five.