I don't like toys, I've lost the imagination required to play with them, and I have too many adult pretensions to play without the inhibitions required.

Toys are great predictors of the future, though. When technology is cheap enough to be embedded in toys, then we should be paying attention.

Recently I've been tinkering with Bakugans. Toys that would probably qualify as a craze just a few years ago, but from what I can tell are still popular now. 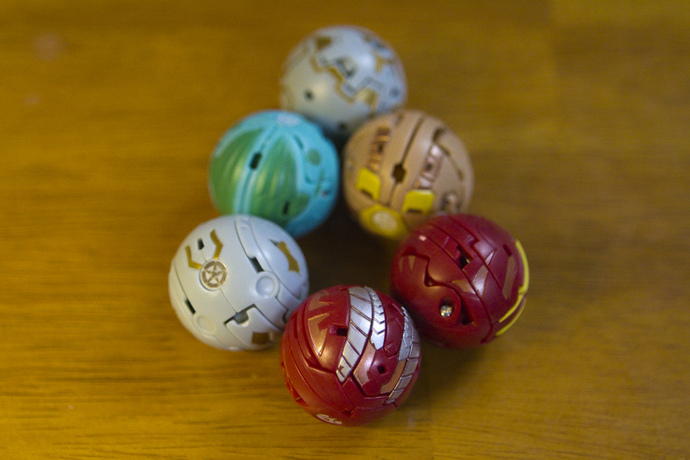 I almost universally hate them. They're unreliable. A confused mash of game mechanics and hooks designed to extract money from children with the smallest amount of fun in return. But aren't they pretty?

They're nicely sized, small enough to be pocket toys and very intricately designed. A magnet in the base allows the ball to open up into the shape of a dragon, robot or snake. Bakugans are to be rolled, like marbles, across a field of playing cards which carry a metallic strip inside them, causing the ball to stop rolling and spring open. Each Bakugan has a number printed inside, to be scratched off like a lottery ticket, and this forms part of a wider numbers game when combined with the card they land on.

These are, I think, meant to be affordable toys. Each Bakugan is effectively a marble with the imagination taken out, the rules written down, and formalised, because each one can be used in a card game which apes Top Trumps, but in a more collectible, mercenary way.

These are pocket toys that reference heroic fiction, anime, collectible card games and seasonal gaming (new toys are released in conjunction with each season of the accompanying cartoon). Each element has been thrown together without much thought, and the result is inevitably confusing. What's almost unforgivable though, is the fact that they just don't work.

For all this, they are clearly successful, and toys are getting more ambitious, so it was interesting to read this article on Ready For Ten about the upcoming toys in 2011.

Suprisingly, the winner of the British Toy and Hobby Association's award for Best Pocket Money Toy is something called a Star Wars Slinger. How does it work? Like this -

A yo-yo with a magnet to pick up a range of collectible discs! Clearly I don't know anything about toys, but I bet it won't work properly 9 times out of 10.

Perhaps the next wave of exciting technology isn't yet affordable enough to reach mass market. New takes on old ideas involving magnets, marbles, collectible card games and tokens, plus the return of Big Trak might indicate stagnation, or an industry treading water. That probably explains why so many toys have so many different game mechanics thrown at them.In lieu of something genuinely innovative, here's to big IP, copying popular ideas without fully understanding them, and doing the same thing over and over.

Duncan is a Creative Technologist with a particular passion for gaming. He is a co-founder and CTO of GameLayers, a games company based in San Francisco, where he co-created a passively multiplayer game called The Nethernet.